The State of Texas has a reputation for having harsh penalties for controlled substance convictions, including lengthy prison sentences and hefty fines.

If you are arrested on allegations of possessing Methamphetamine, commonly known as meth, you are facing serious charges and potentially severe consequences. Considering that meth has become a major issue throughout Texas, judges and law enforcers are taking a harder stance against those charged with possession of meth. Of course, meth is one of the powerful, highly addictive, and dangerous drugs.

In this article, you will learn about federal and state meth possession laws and penalties in Texas, emphasizing the Houston area. If you’re looking for a drug offense law firm in Houston to help you with a criminal charge related to meth, consider The Gagliardi Law Firm, PLLC. The main drug crimes lawyer there is Joseph Gagliardi and he’s very good at what he does. Give him a call at 713-224-6277 to get started with solutions for your situation.

In Texas, controlled substances are listed under various penalty groups depending on the level of danger they pose to the public.

Although there are some medical reasons why meth may be prescribed, it is considered a dangerous drug with a high potential for abuse reason being; it is very addictive. Possessing even the smallest amount of crystal meth is considered to be a felony under Texas law.

Unlike many other narcotics, nothing in methamphetamine is naturally grown. The drug is purely made from dangerous chemicals, which are mixed and “cooked” to create a rock-like substance.

Under Texas laws, methamphetamine is listed under Penalty Group 1 of the Texas Health and Safety Code, meaning criminal charges involving this potent drug are subject to the strictest possible penalties.

On the other side, federal laws list methamphetamine as a Schedule II drug, which means it has a high potential for abuse. Its use can cause severe psychological and physical dependence.

An individual can be charged with:

Not only is the possession, manufacturing, or distribution of meth illegal, but it is also illegal to possess material and chemicals necessary to manufacture this substance.

That said, if the alleged offender is arrested while in possession of substances like metal extracted from lithium battery, anhydrous ammonia, or excessive ephedrine or pseudoephedrine, he or she may be charged with manufacturing methamphetamine.

Penalties for Possession of Crystal Meth

Meth is classified with other most addictive drugs like cocaine and heroin. Possessing any amount of this substance results in a felony charge. Like for other controlled substances in Penalty Group 1, here are the penalties for possession of methamphetamine. 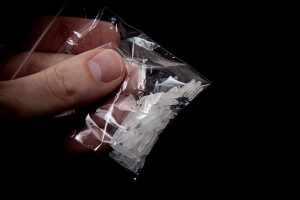 Possession of equipment or substances necessary to make or transport methamphetamine can aggravate charges leading to manufacturing or intent to distribute charge.

If you have been arrested on charges of possessing or distributing crystal meth and are innocent, you need a knowledgeable Houston criminal defense lawyer to offer you the necessary legal advice and represent you during the trial.

Also, if you’re guilty as charged, working with a remarkably aggressive meth defense attorney can help you get favorable sentencing. A defense attorney who thoroughly understands federal and Texas drug crime laws and has experience in similar or related cases can devise a top-shelf defense strategy and help you win your case.

Methamphetamine or crystal meth or simply meth is a dangerous and addictive substance with a high potential for abuse. For this reason, Houston law enforcement agencies are relentlessly pursuing dealers, manufactures, and users alike. If you or your loved one is arrested on meth-related charges, a knowledgeable defense attorney can help you escape the unforgiving criminal justice system of Texas.